We use Google analytics to monitor statistics regarding our website. We use them to plan changes or development of the website and the services we offer..

The story of Carrs Lane Players…

Carrs Lane Players was formed shortly after the new church building at Carrs Lane opened in 1970. As enthusiasm for stage performance blossomed, and the drama group performed its first play in 1971.

From a modest beginning, ‘Players’ attracted a regular and loyal following. In recent times a welcome introduction of younger talent has enabled the group to expand and attempt a wider repertoire. As a result, audience numbers have more than doubled, giving us real encouragement.

A taste for drama

In 2020, The Carrs Lane Players celebrated their GOLDEN ANNIVERSARY!

The drama group offered an evening of entertainment beginning with a sumptuous meal, followed by a performance of ‘Out of Sight – Out of Mind’, a trio of one-act plays. Performances took place from Thursday 20 February to Saturday 22 February.

This was our last in person performance due to the pandemic.

The Carrs Lane Players planned and rehearsed on Friday evenings. There was good fellowship and tremendous enthusiasm in the group. We wished to continue this and, since the periods of lockdown, we have been meeting on zoom and doing play readings. We encourage new people to join us and are hoping to put something on ‘in person’ in the future. For full details contact Liz Cummings c/o Clerk@carrslane.co.uk 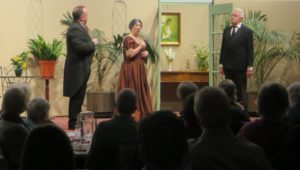 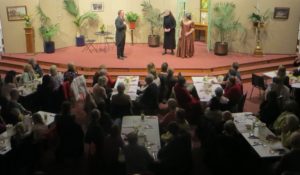 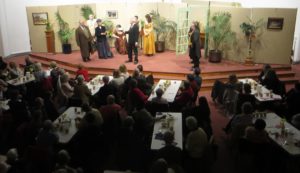